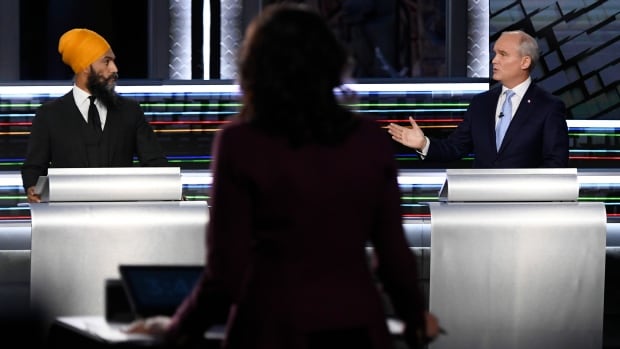 With 11 days until the election, this appears to be a close race between Liberal Leader Justin Trudeau and Conservative Leader Erin O’Toole — although a majority government win by either party seems unlikely at this point.

With many voters still uncommitted, the stakes going into the only English-language debate were high.

Here are some of the key moments from the debate.

Trudeau and O’Toole also battled over climate change, with both leaders offering up their plans as achievable and effective.

During the English leaders’ debate, Liberal Leader Justin Trudeau and Conservative Party Leader Erin O’Toole respond to the question about how one in four Canadians do not believe climate change is caused by human activity. 2:11

At the Conservative Party’s March policy convention, delegates voted to reject adding green-friendly statements to the policy book — including a line that would have stated the party believes “climate change is real” and is “willing to act.”

O’Toole responded by saying that Trudeau has “never made a target” on emissions.

And O’Toole wasn’t the only one in Trudeau’s crosshairs on the subject.

The NDP’s climate plan has come under scrutiny in recent days, with Simon Fraser University environmental economist Mark Jaccard saying it would be “largely ineffective” and “unnecessarily costly.”  Former B.C. Green Party leader Andrew Weaver, meanwhile, has endorsed the Liberal climate plan over that of the Green Party.

Singh said he gives Trudeau’s climate record an ‘F’ because emissions have continued to rise under his leadership.

In 2019 — the first year of the federal carbon pricing system, commonly called the “carbon tax” — Canada produced 730 megatonnes of carbon dioxide emissions, an increase of one megatonne — 0.2 per cent — over 2018.

Watch: Liberal and NDP leaders debate the merits of their climate change platforms:

Justin Trudeau and Jagmeet Singh spoke during the English leaders’ debate, hosted by Shachi Kurl of the Angus Reid Institute. 2:21

On Indigenous issues, Trudeau attacked O’Toole over comments he made recently regarding how unmarked graves at residential schools are being honoured.

“On Indigenous issues specifically, he says we need to listen to Indigenous peoples. Well, he proposed that he would raise the flags that are at half-mast for the kids in unmarked graves in residential schools and he didn’t talk to or listen to any Indigenous leaders when he made that decision,” Trudeau said.

Watch: Trudeau attacks O’Toole for saying he would raise the flags that were lowered for Indigenous children:

Accusations of inaction on reconciliation

Liberal Leader Justin Trudeau goes after Conservative leader Erin O’Toole for saying he would raise the flags that were lowered for the hundreds of Indigenous children whose unmarked graves were identified in sites across the country. 3:14

In reply, O’Toole said he sees raising the flag again as a symbol of Canada’s commitment to reconciliation.

“As prime minister on the national day of reconciliation, September 30, I will raise the flag with the commitment to move forward on calls to action,” he said.

In the Truth and Reconciliation Commission’s final report, it presented 94 “calls to action” urging all levels of government — federal, provincial, territorial and aboriginal — to work together to change policies and programs to repair the harm caused by residential schools and move forward with reconciliation.

Trudeau, who has frequently called himself a feminist, was asked how he can use that term when the military is mired in sexual misconduct scandals.

Trudeau said his government has put stronger policies and processes in place to support survivors.

Green Leader Annamie Paul said that, based on what she has seen, Trudeau is not a feminist. She went on to thank several female former Liberal politicians — including Jane Philpott, Jody Wilson-Raybould and Celina Caesar-Chavannes — who left or were removed from the party after coming into conflict with Trudeau.

Trudeau fired back at Paul, who recently faced a revolt within her own party. “I won’t take lessons on caucus management from you,” he said

Liberal and Green leaders have heated exchange over feminism and leadership

Justin Trudeau and Annamie Paul had the first exchange in the English leaders’ debate, hosted by Shachi Kurl of the Angus Reid Institute. 2:12

The debate kicked off with a lively exchange between Bloc Québécois Leader Yves-François Blanchet and debate moderator Shachi Kurl over Bill 21, which bans some civil servants, including teachers, police officers and government lawyers, from wearing religious symbols at work.

The Quebec government said the restrictions were necessary to protect Quebec’s unique version of secularism.

Kurl, president of the Angus Reid Institute, asked Blanchet more than once “why the discriminatory laws and your support for it sir?”

“You may repeat as many times as you like that those are discriminatory laws,” Blanchet replied. “We are saying that those are legitimate laws that apply on Quebec territory and there seems to be people around here which share this point of view.”