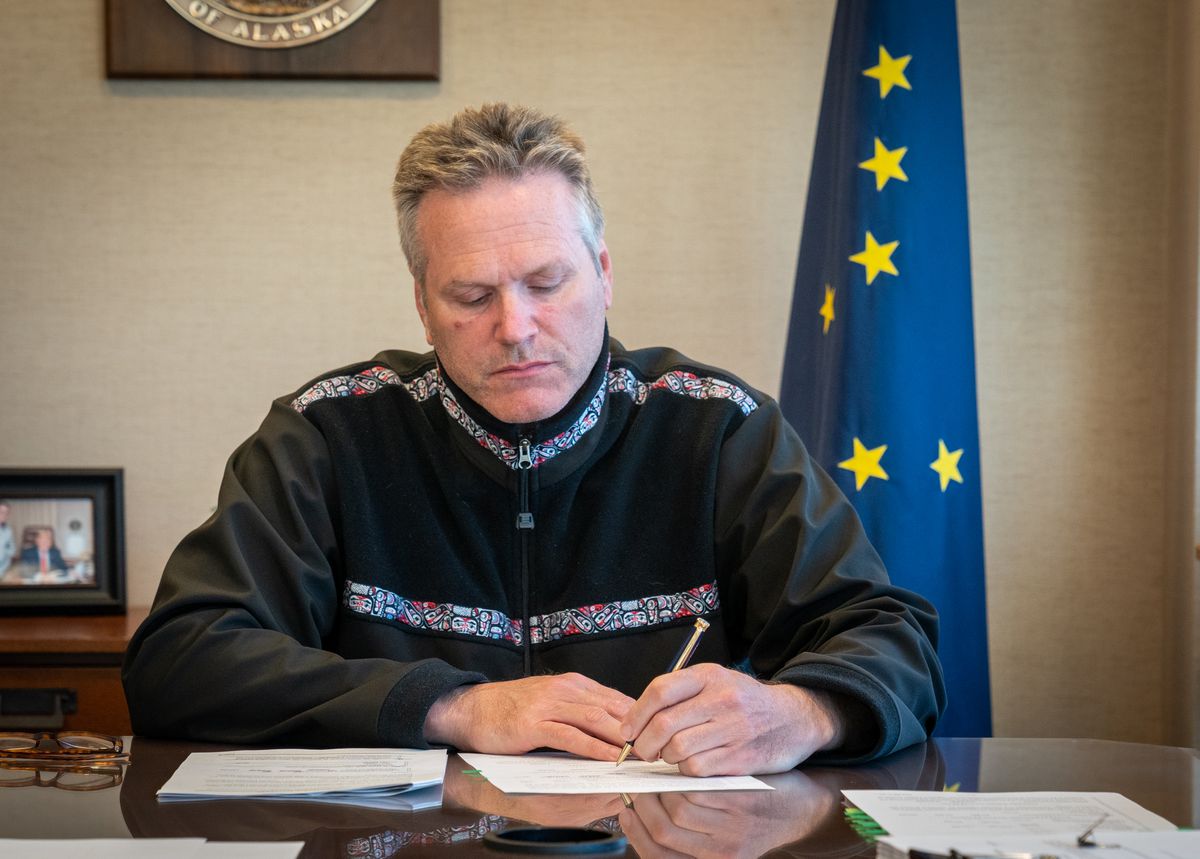 JUNEAU — On Wednesday, Gov. Mike Dunleavy unilaterally cut $215 million from Alaska’s state budget, eliminating increases proposed by the Alaska Legislature and mostly reinstating a budget proposal he introduced at the start of the year.

Dunleavy, explaining his vetoes on Thursday, said that “overall, there weren’t large cuts to existing programs.”

Though the vetoes are small compared with the overall size of the state’s annual budget, some individual vetoes were substantial in comparison to the size of the programs they involved. For example, Dunleavy vetoed 62% of state funding for the Alaska Legal Services Corp., which provides help to veterans, victims of domestic violence and others in civil lawsuits.

Other vetoes reduce assistance for children in foster care, cut funding for a major tourism marketing group, erode school maintenance money and pull funding from construction projects proposed by the governor himself.

Dunleavy also vetoed this year’s Alaska Permanent Fund dividend, but state lawmakers are expected to propose a new dividend later this year. The future is less clear for other programs.

“I think it throws a wrench into the works of that. I really do,” he said.

Lawmakers have been planning the agenda for a special session later this year, and Begich said the vetoes “change the conversation to: How do we defend programs?”

For the current fiscal year, from July 1 to June 30, preliminary figures indicate the state expects to spend about $4.6 billion on state-funded programs and construction, plus another $8.2 billion on programs funded by fees and the federal government.

After the vetoes, the amount of state spending is down from the budget at this point last year and is similar in size to budgets under former Alaska Gov. Bill Walker’s administration, according to figures provided by the Senate Finance Committee.

That’s because the governor and Legislature are spending less on the operations of daily services, even as they increase the amount spent on construction and renovation projects.

The governor’s vetoes reinforce that trend. Some simply reverse increases proposed by the Legislature. The Alaska Seafood Marketing Institute, for example, had been scheduled to receive $10 million in federal pandemic economic relief. Dunleavy vetoed $3 million of that funding, reducing the increase to $7 million.

He said the Legislature’s budget proposal included “a number of items that would have grown government that we don’t believe we need at this time.”

Alaska doesn’t provide attorneys for domestic violence victims in civil lawsuits. Instead, those victims must turn to organizations like the Alaska Legal Services Corp., which saw Dunleavy veto $400,000 from its budget, a 62% cut, said executive director Nikole Nelson.

Corey Allen Young, a spokesman for the governor, said the administration disagrees that the veto is a cut.

Figures published by the governor’s Office of Management and Budget indicate that state funding for the corporation will drop from $810,300 to $311,600, less than what it received a decade ago.

Funding rose from 2018 to 2019 under a bill that diverts some court filing fees, and Young said the veto “removes the double-dip increase of the past three years.”

Nelson said, “we are the largest provider of civil legal aid to domestic violence survivors. I don’t understand how that squares with (Dunleavy’s) statements and commitment to rooting out domestic violence in Alaska.”

In the previous 12 months, the corporation helped about 7,500 people. Dunleavy’s cut means more than 800 will be turned away, and the corporation already turns away one prospective client for every person it’s able to help, Nelson said.

Lawmakers proposed about $8.5 million in additional funding for the beleaguered Alaska Marine Highway System to provide more sailings in coastal Alaska. Dunleavy vetoed that addition, saying he’s waiting on more information regarding long-term changes to the system. The framework for those changes — which, in the future, would fund the Alaska Marine Highway System in advance and prevent abrupt schedule changes if its budget is cut — was part of this year’s state budget and kept intact by Dunleavy.

Robert Venables, a member of the task force that Dunleavy convened to consider those long-term changes, said the money could have been helpful, but it’s not “debilitating” to the ferry system.

“Anytime the system loses funds that might be available to them is disappointing, but as long as the long-term agreement is agreed upon … that is really the big win we need to keep our focus on,” he said.

Lawmakers had proposed spending $3.4 million on a state program that works with tribes to deal with child custody issues. Alaska Native children make up 15% of the state’s general child population but represent 60% of the children in state custody. Because state officials aren’t in every village, an agreement with tribes allows them to take up some of the work.

Dunleavy vetoed the money proposed by the Legislature, but the program still receives some funding. Nicole Borromeo, vice president of the Alaska Federation of Natives, called the veto “disappointing,” given flat funding for the agreement over the past few years.

Corey Allen Young, a spokesman for Dunleavy, said that no positions were cut from the Office of Children’s Services. But the governor’s vetoes reduce funding for third-party groups that help foster youths.

At the start of the year, Dunleavy had proposed cutting grants used to pay for foster care programs. The Legislature rejected that cut, but Dunleavy used vetoes to restore the cut.

Trevor Storrs, director of the Alaska Children’s Trust, and former state Rep. Les Gara, D-Anchorage, each said the cut is harmful because the state is already suffering from a shortage of foster homes.

“It’s just disappointing that our governor and at times our legislators do not think strategically,” Storrs said.

In hearings earlier this year, officials from the agency that handles foster care programs said employees were badly overworked. More than half of the agency’s 233 employees had left their jobs within a year. To reduce turnover, they suggested giving bonuses of $1,000 apiece. The Legislature proposed raising that to $3,000 per person and hiring a therapist to help employees deal with the trauma they endure.

“The benefits of this proposal are unsubstantiated and do not address the effectiveness of the organization of the whole department,” his office said in a document outlining the reasons for each veto.

The governor vetoed $10 million for the Alaska Travel Industry Association, a nonprofit with more than 600 members that manages the Travel Alaska statewide destination marketing program. The association last year received a nearly $300,000 contract to answer public questions about COVID-19 travel and vaccines.

It comes as ongoing marketing efforts to attract travelers, along with marketing efforts by the governor’s office, are starting to pay off this summer, according to president and CEO Sarah Leonard. Next year is expected to be even more competitive as international destinations return post-pandemic.

“However, without a funding allocation for statewide destination marketing of Alaska, the momentum that’s been created will be cut off and there will be no funding to market Alaska to potential travelers in 2022 and beyond,” Leonard said in a statement Friday. “Alaska competes with other domestic destinations to attract visitors who have an ever-increasing pent-up demand for travel.”

The loss of the funds hampers the group’s efforts to help with Alaska’s recovery, the statement said. Alaska tourism employment and wages were down 78% in 2020, impacting 50,000 direct and indirect jobs connected to Alaska’s tourism.

Young, the spokesman for the governor’s office, said that in the last fiscal year that ended on June 30, Alaska tourism marketing received $20 million in COVID-19 relief fund money including $7 million for the association.

“Given the significant federal assistance rendered to organizations like ATIA, the Governor felt it was appropriate to maximize the state dollars available for appropriation,” Young wrote in an email. “Governor Dunleavy’s historic investment in marketing Alaska, both through direct means and through grants to all kinds of nonprofit visitor agencies in Alaska including ATIA is proof of his support for this important industry.”

Among them is roughly $28 million in school maintenance funds: more than $21 million for what’s called “major maintenance” projects at schools around Alaska, and over $7 million for repairs at Mt. Edgecumbe High School in Sitka.

A ranking of capital projects includes two Anchorage projects. The list starts with the renovation of the Galena Interior Learning Academy, rehabilitation of the Craig Middle School, improvements to Eagle River Elementary, a refund for a heating upgrade at Kake schools and roof replacement for West High School in Anchorage.

In Kake, repair needs are stacking up after several years with inadequate funding, according to superintendent Richard Catahay, who referenced old carpets and ventilation systems.

“I don’t think (the state) should be functioning that way,” he said. “Governments should find money to fund schools and keep them open for kids.”

Other cuts include $635,900 from the online libraries program.

On the University of Alaska Anchorage campus, deferred work, especially on heating, ventilation and air conditioning systems, has grown to $130 million.

“The intended use of our vetoed capital funding was targeted for some of our oldest and most out-of-date pneumatic systems in the Professional Studies Building, Social Sciences Building and the Wendy Williamson Auditorium,” said Bill Jacobs, the university’s vice chancellor for administrative services. “A critical failure with these systems could render entire buildings unusable for months, placing UAA in a crisis as we continue critical operations and instruction.”

The university this week announced it would guarantee student scholarships and grants left unfunded by the lack of a “reverse sweep” during budget proceedings. The university will honor Alaska Performance Scholarships and needs-based Alaska Education Grants awarded to new and continuing students for this fall, according to a statement from interim president Pat Pitney.

“I am confident the Legislature and governor will resolve this issue during the August special session,” Pitney said.

[Editor’s note: This story has been updated to add comment from Gov. Dunleavy’s office on his vetoes related to foster care and context surrounding long-term changes to the Alaska Marine Highway System.]